Still getting a few things in order before the season starts for me.
I have steeda RCC kit and if you know, RCC kits reduce the amount of camber. I have MM camber plates and those with the same set up get a max of about 2.1*. So instead of paying for an alignment to just come to the same conclusion of not having a enough camber, I decided to search for new plates. Only plates that I know that are capable are Vorshlag (out of my budget right now) and Steeda. I saw the price went up on the Steeda plates and remembered MMR just released theirs. I contacted Mark and he gave me an amazing deal that was worth trying them out. He said he had MM plates previously and was able to gain an extra degree of camber with his plates.

They arrived today. Look great to me but I don’t really know what to look for or how to compare plates. I’m hoping to get them installed within the next two weeks. Who doesn’t love gold?! 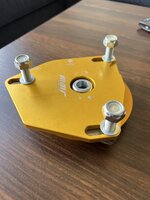 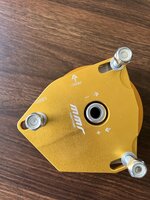 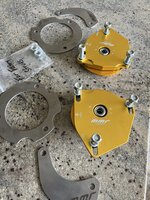 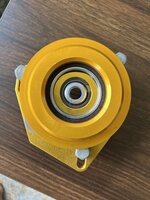 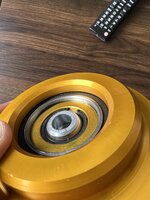 Its been another slow start to the year just due to life and having issues between the tundra and the mustang. Life wouldn't be fun without obstacles anyways.

Just finished up my first event of the year yesterday at Summit Point Main with HOD. It was my first time driving with them and was a great experience. Being that I haven't been to the track in a year, I didn't care much about lap time and was more focused on technique and trying different things such as heel toe and trail braking. I was solo'd last year with Auto Interests but being that its been 12 months and my first time with HOD, I requested an instructor.

Changes to the car:
I guess I should rewind:
Before this event, I have been working on the car. The MMR camber plates gave me over a degree more camber than the MM plates I had. great product. I did notice that it raised the front up about half an inch. Still has a decent rake so not the end of the world.

I was also gifted an Xineering module so I put that in and can turn it on/off with a toggle switch and a bright LED to let me know it on when on track no matter how sunny it is. 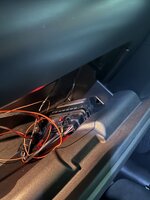 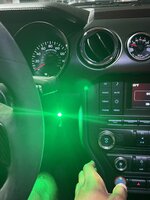 Another thing I added was the Aerocatch hood latches. It is definitely not the easiest job using the radiator support locations. Its three layers to cut through with the top two being extremely close together. I started it, but after messing with it for 3 weeks (school and work), I took it to a shop to finish the job. came out great. 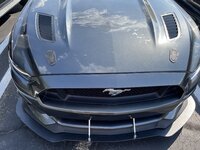 Went with the Vorshlag rear tow hook. Didn't care for the way ZL1 Addons mounted theirs. Vorshlag states on their site that the rear fits all S550 but if you are interested, make sure you have quad exhaust or at least quad exhaust cutout. I got the bumper off and notice when putting it back that the tow hook didn't line up with the exhaust cut out. After doing all the work of taking the bumper off, I was determined to make it fit. I plan on going with quad exhaust one day so I don't mind the look for now. Can't tell unless you are really looking at it (at least to me). I have the ford performance front tow hook but didn't have time nor feel like drilling through the crash bar at the time. 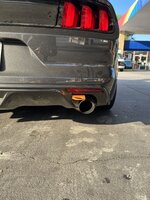 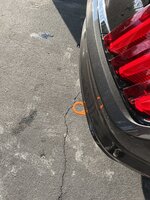 Divorced my clutch and brake reservoir and switched to SRF. 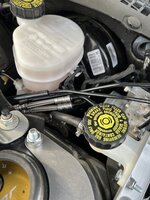 I wanted to upgrade from Track Addict and for the price and potential, I went with AutoSport Labs RaceCapture Track MK3. Its their new module that was released earlier this year. Takes some getting used to but for what you can do, its a great buy imo. Will add their shift light at some point. I bought mine from one of their dealers, John Freund (John Freund Racing). Great guy and has some great device on his site that I think are pretty cool. 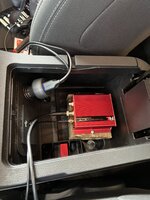 Now back to yesterday:
Car felt amazing and being back on the track felt event better. I was running in the same group as first timers so passing only on the straights. First session I had to clean the dust off but second and third session were completely different. I tried using the Xineering module, but was unsuccessful. I couldn't get used to it blipping for me and every time I downshifted, I wanted to blip myself so it messed me up. I turned it off for the rest of the session. As you know one of the downfalls of the module is that you need an Android or PC to change the settings. I had neither at the track so it was no good to me. On the street I can use the outside of my foot without issues, but on the track, I found my right foot too far to the left so there were times I was missing the gas pedal to blip even with size 13 feet and SRP pedals. I found a great tip on heel toe form a thread in M6G which was to raise the steering wheel. With the steering wheel raised, I was able to twist my leg to blip the pedal with my heel. I found this to be much much better and easier. Now my only issue is to not over brake and to keep pressure on the brakes as I blip to prevent unsettling the car. My brake release greatly improved as the laps went on to the point my instructor couldn't feel me getting off the brakes. I also started getting on throttle earlier and trusting the RRs.

In my third session, I was black flagged for exhaust smoke. I pulled in and we couldn't find any leaks. In the paddock, I opened the hood and saw oil/fluid residue on the cold air intake box and oil droplets on the oil filter access panel. the filter was tight so it wasn't that it was loose. Didn't get any lights on the dash or abnormal feeling in the car. The same thing happened to me last year in the last session at the same sequence of turns. After waiting over an hour and a half for AAA, I decided to take the chance and drive home. I made it without any issues and come to find out it is the infamous driver side cam cover issue. I was planning to do the aluminum GT500 cam cover upgrade this winter, but it looks like it will happen sooner than later. I think that covers just about everything lol.

All in all, it was a great day, and talked to some nice people. I am hoping to have the car ready by September 24th weekend for either Summit with Track Daze or NJMP Lightning with HOD.


If you made it this far, I appreciate you and hope you receive good fortune this week. If you didn't, I still hope the same lol.

Things to work on/to do and notes: 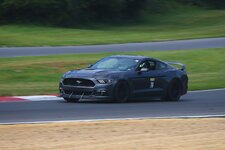 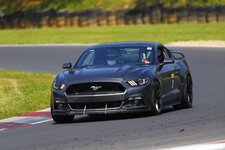 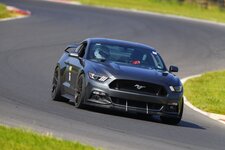 First Track Build
HPDE/Track
You must log in or register to reply here.