You may want to go to a watts linkage instead of that panard bar...JS

Albino500 said:
You may want to go to a watts linkage instead of that panard bar...JS
Click to expand...

From a bit of Reading, im starting to think you Are correct. I have been so obsessed with the 3rd link as its the last piece not replaced yet, that I May need to rethink and ask a conpletely different question :

With my setup, the rear end feels unstable, how can I fix it? Ill look into watts link, thanks.

In the corner with the squelch turned up

trackmustangsonline.com
“dont give a shiznit what you think” - racer47
“Why are you such an ass?” - TMSBOSS

a few miles east of Philly

Grant 302 said:
My opinion is better potential for grip on corner exit with the shorter arm…all depending on the rest of the rear setup in both geometry and hardware used. It’s all in the dynamic changes of instant centers for each side.
Click to expand...

Grant 302 said:
The longer arm should have less migration of such points and could potentially be more consistent. I think this is generally true of the OEM setups and why Ford made the update.

I hope that’s not too vague.
Click to expand...

Perhaps Ford was prioritizing straight line acceleration more with the extra power given to the later S197s . . .

A horse with no name
HPDE/Track

I just went through this same thing and ended up going with a BMR 11+ upper mount with whiteline UCA with Max C bushings and a 2014 GT500 diff bushing. I feel this was the best set up for a street/hpde car.

The increase in rear grip with the Roush arm is mainly because it lowers the body side mounting point by about 3/4" which increases % anti-squat. That is why it was originally sold as a "no-hop" solution for the S197.

Again, Billy was quite clear that if it were still available from Roush, he would have used the 2011+ arm. He also is installing this in a car at near factory ride height (what is was designed for) and he has not installed lower control arm relocation brackets.

I think the Roush arm is a very good solution for a street car that sees some HPDE. It is not necessarily the best solution for an all out track or race car (which again, Billy clearly points out in his board answers and in his article).

The simplest, most trouble free way to build your suspension system

Except the watts, you can skip that part

blacksheep-1 said:
The simplest, most trouble free way to build your suspension system

Except the watts, you can skip that part
Click to expand...

Could you send me this file, it does not open for some reason.

Anyways a little update, being off season with snow outside I decided to give the Roush uca a try. I figured if it worked on Billy Johnsons race cars, it Will work for me as well. Install was a breeze, I had to drop the fuel tank on Both sides to get the old one out but the rest was No big deal with Basic tools and an impact wrench.

From inspecting the UCA it was actually showing signs of wear despite Just over 10k miles.. It was also evident that the New roush unit is a stiffer type with a much smaller bushing. But then I noticed something when comparing the two arms, and I see 2012 boss Said it earlier - the forward mounting point is a full inch lower than stock, dramaticly changing geometry. Lets Just say Ive read more on squat the last 2 days on my mustang then 20 years in the gym.. So please be gentle, Im still learning.

But if my calculations Are correct, I Will need to remove my relocation brackets or my anti squat is, even at the top most hole of the brackets, above 100%.. The lower mounting location increased anti squat by a lot and put the IC furter to the rear.

However, removing those brackets could be a good thing as this Will bring my lca angle in a way that promotes roll understeer that im thinking could be a good thing on a street car.. Ill need to get the car on the ground to measure my control arm mounting points to confirm when im done with it and see how it looks on the calculator.

On a sidenote I installed a truetrac as well, as my old lsd was worn and terrible to drive with, smoking the inner wheel on tight low speed corners. Ill need to wait until fall to test, but im really looking forward to seeing how the roush control arm works, and if it does anything to solve that "floating" feel of the rear end.


Edit: I forgot to mention that I found something that could have been my problem all along. One of the nuts on the panhard bar adjustment screw was loose and had actually unscrewed itselfe about 1 turn. This did not alter the phb length, however the nut serves a dual purpose.. 1 it stops the adjustment rod that is screwed into the panhard bar tubes from turning and 2 it stabilizes it to the tubes.. In effect the phb now had the same slop in it as the threads between the tube and the adjustment rod, and this could be a Great contributor or perhaps the root cause of my rear end issue. Unfortunately I have now changed 2 things in the rear end, so if it works I cant really tell what helped. 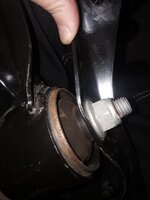 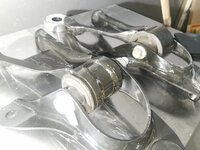 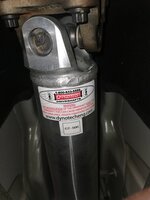 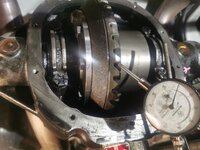 With respect to pinion angle, is it feasible to adjust it via shimming the transmission mount instead of the UCA?

Or is that so far away that the shim would be too thick and adversely affect the angle of the engine and engine mounts?
Chris

If you don't want to adjust pinion angle with the upper control arm you can always do adjustable lower trailing arms.
Eric
2011 red candy GT, 401a, Brembo, 3.55 rear,

EF1 said:
If you don't want to adjust pinion angle with the upper control arm you can always do adjustable lower trailing arms.
Click to expand...

True, but that could introduce other complications (i.e., wheel centering) and is additional expense.

If shimming the trans mount is not a viable option, I'd rather go with an adjustable UCA.
Chris

Today I got the car on the ground and did some measurements for the calculator. Being a total newbe in this rear axle geometry game, I would suggest nobody take my numbers very seriously, and Im sure somebody will tell me what Ive done wrong and Im very open for the possibility of being completely wrong here

Without relocation brackets I get 65% AS and trailing arms @5 degrees being higher on the axle side.

With the top hole of the brackets I get 102%AS with a 1.2 degree angle of the trailing arm, lower at the axle.

If my calculations Are correct (highly unlikely) I belive I Will be better off without the relocation brackets when using the roush arm. Any comment Are very welcome.

I also measured my front end and the center of the outer ball joint is 10mm lower then the control arm bolt, so I probably would benefit from longer ball joints up front. For now I adjusted the front arb to the inner most hole as a bandaid.


@stevbd I dont think Billy J commented on the geometry change, I found it by accident when comparing the two links. If I remember the article correctly it was the soft(er) rubber bushing that cushions the hit, improving traction. It should also cause less bind then the poly, Im not sure if he mentioned that but thats my reasoning anyways. As for your comment on AS, changing the front UCA mounting point increases AS % by putting the IC higher and further to the rear end of the car, and it has a huge impact as well, probably because the arm is so short. How this works in real life I have no idea, Im just playing with a calculator here.. I actually found a comment that the race teams using the 302S actually did not use the included ford racing relocation brackets as they found the upper (OEM axle mount) worked better. Perhaps to do with rollsteer more than squat? Im not sure. Unless somebody corrects my math I will test the car without relocation brackets and see how it drives. Hopefully I can make it to the track in May if the Salt on the roads is gone by then. 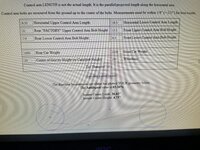 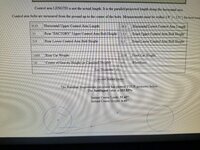 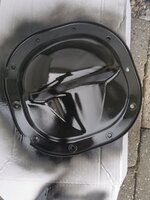 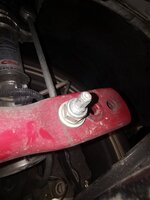 @Theking, sorry, I found my mistake and deleted my earlier post. I was comparing the IC to the COG, but I was forgetting to draw the line from the rear contact patch through the COG. Carry on! And good for you actually measuring this stuff. Nice work.

Everytime you start switching out suspension parts there are trade offs. The UCA is probably the most common way to correct pinion angle after altering ride height. The UCA is a bit of a pain to install and adjust with the suspension at ride height. Adjustable lower arms do have to be adjusted evenly to keep everything in alignment, but they are easier to get at. It isn't an option I would choose for the reasons you stated. I was just pointing out another option.

Coz said:
True, but that could introduce other complications (i.e., wheel centering) and is additional expense.

If shimming the trans mount is not a viable option, I'd rather go with an adjustable UCA
Click to expand...

EF1 said:
Everytime you start switching out suspension parts there are trade offs. The UCA is probably the most common way to correct pinion angle after altering ride height. The UCA is a bit of a pain to install and adjust with the suspension at ride height. Adjustable lower arms do have to be adjusted evenly to keep everything in alignment, but they are easier to get at. It isn't an option I would choose for the reasons you stated. I was just pointing out another option.
Click to expand...

Or you could do a toque arm and never have to worry about pinion angle or anti squat ever again.
Just a thought.
My entry fee covers the whole track - not just the part that YOU want me on.
-Sal Molinare IG @fabman302
Subscribe to my YouTube Channel
www.Youtube.com/c/salmolinare

Any luck with that suspension set up file? Im curious.
You must log in or register to reply here.